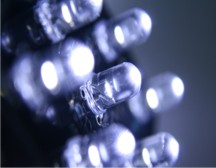 Light Emitting Diode (LED) light bulbs have reshaped the landscape when it comes to residential and commercial lighting. The installation of these long lasting, highly energy-efficient fixtures has become a job handled by W.W. Walls Electrical on a regular basis. But what exactly is an LED light, and why should you consider making the switch in your home?

The traditional incandescent light bulb, a filament housed within an air tight glass container that glows brightly when electrical energy is provided, have been the centerpiece of electric lighting for a century or more. While much improved over their crude forebears, the light bulb as we know it today still has many shortfalls. Chief among these are fragility, relatively short life spans, high energy consumption, heat generation (hot to the touch) and difficulty in disposal once the bulb has burnt out.

In contrast LEDs are a relatively new device with its origins dating back to the early 1960s. A light emitting diode is an electrical semiconductor device that produces visible light when an electrical current passed through it. Considered a form of Solid State Lighting (SSL), LED lights are small, bright and available in a variety of different colors. While the traditional bulb is a legacy of the 19th Century, LEDs are truly a lighting option for the 21st.

One of the key advantages of LED light bulbs is its miserly energy consumption levels. The LED method of producing light loses far less energy to heat (cool to the touch) than any other lighting method. LED lighting fixtures are much more energy efficient than the traditional vacuum / filament incandescent bulb. By some estimates an LED bulb can be as much as 85 per cent more energy efficient than its dowdy older cousin. For example a single light fixture mounting a 60-watt incandescent bulb consumes on average about 525 kWh of electricity per year. In contract an LED bulb in that same fixture will require an energy consumption of about 65 kWh, while generating the same or even more actual light!

Saving money on your Hydro bill, while admittedly a good thing is only part of the reason LED lights have become so popular. Another key advantage is the fact that on average an LED bulb will last longer (much, much longer) than an incandescent bulb. Modern incandescent light bulbs have been built with the intention of burning out. They are mass produced, made of thin fragile material and are simply not built for the long haul.

A light bulb typically lasts 1,000 to 2,000 hours or more of continuous use. Since a light isn’t usually on 24 hours per day that probably means your light won’t need changing for months or even years in some cases. But in contrast an LED bulb has been built to last between 25,000 to 50,000 hours! Basically, if you install an LED light, the odds are very good you will never have to replace it. This is especially valuable if your light is placed in an area that is hard to get at, such as high up a stairwell wall or in some other tricky spot. Of course an LED light is costlier than a traditional bulb to purchase, but longevity, ruggedness and cost of operation over time consistently make it the correct choice for any residential or commercial application.

Even thought LEDs first appeared in laboratories and universities 50 years ago, they are still relative new comers to the world of household lighting. As usage of this type of technology increases the per-unit cost of using the lights is expected to drop dramatically. The Lighting Science Group which is a company that develops and manufactures LED lighting has estimated that consumers can expect to see a price reduction of as much as 50 percent within the next two years.

New advances in how the bulbs are made, including more economical ways to create the gallium-nitride semiconductor material which is at the core of LED lighting, will both drive down the price and increase the life span of the bulbs. Electrical researchers are expecting to see 100,000 hour LED bulbs ready for the marketplace in the next few years. Regardless of the application, indoor, outdoor, commercial or residential, LED lighting is the proven winner in terms of cost and longevity. Want to learn more? Than just give us a call and we’ll be happy to discuss the best lighting approach for your home.

Can I Do My Own Electrical Work In BC?

21 tips: no-cost ways to save electricity